skip to main | skip to sidebar

•CLIENT LIST
Here are just a few of the clients that I've worked with over the last 30 years or so.
Big thanks to all of them. 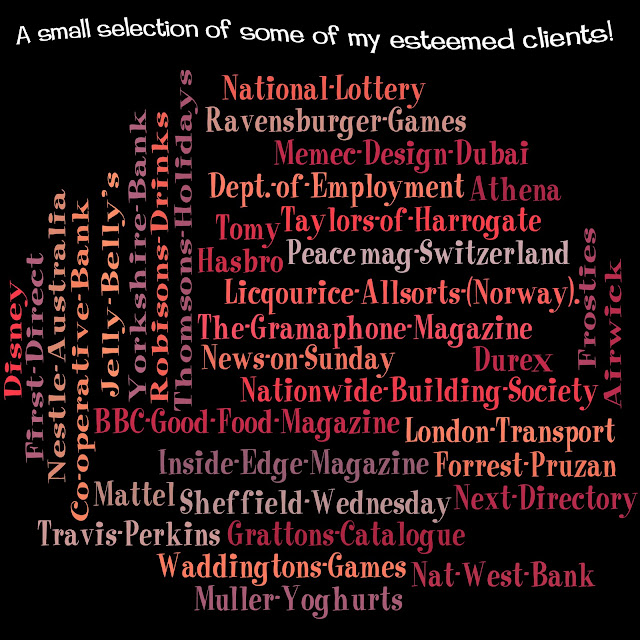 •MORE PRE-DIGITAL WORK
My preferred medium of choice before pixels came along was water colour. Dr Martin's watercolour inks is a fantastic range of brilliant colours and when combined with coloured pencil work they gave me all the freedom and detail I needed to create my first greetings card commissions and posters. Airbrush always played a major role in poster work too. I employed a small variety of styles that included black and white pen work. The brush pens with the rubber tip were excellent for freehand work.
In this set of pages you'll see some of my early efforts, whilst researching and collectingwork for this anniversary blog I was amazed firstly by how much work I had saved, and secondly by just how much I'd totally forgotten ever doing! 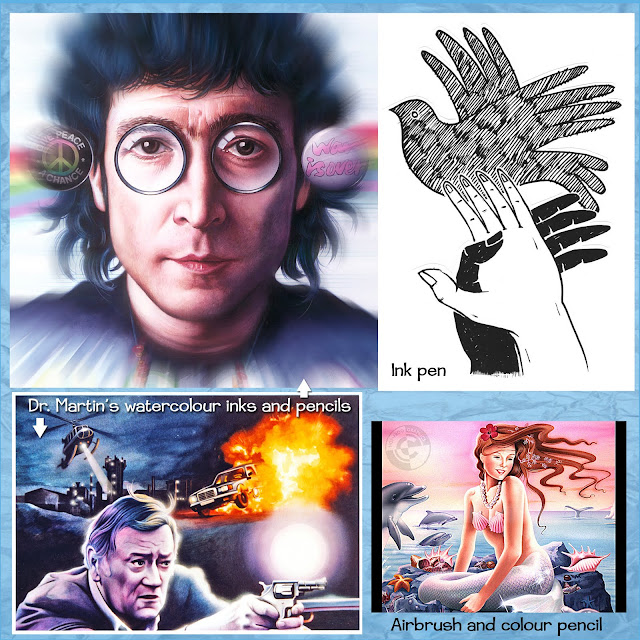 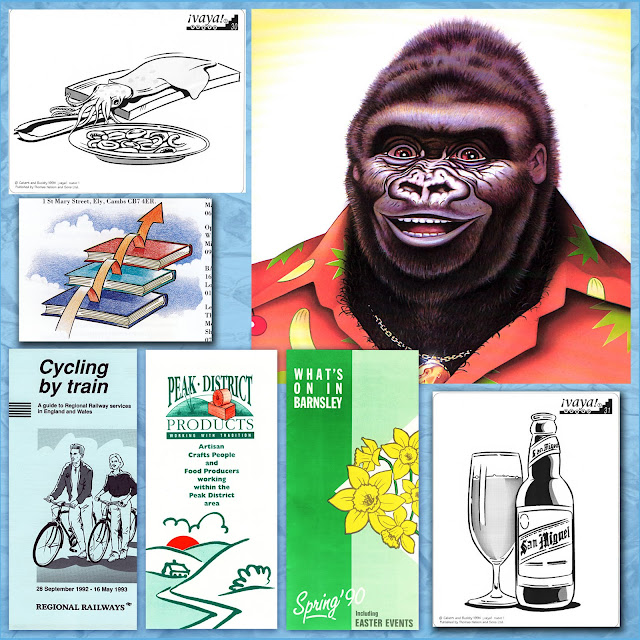 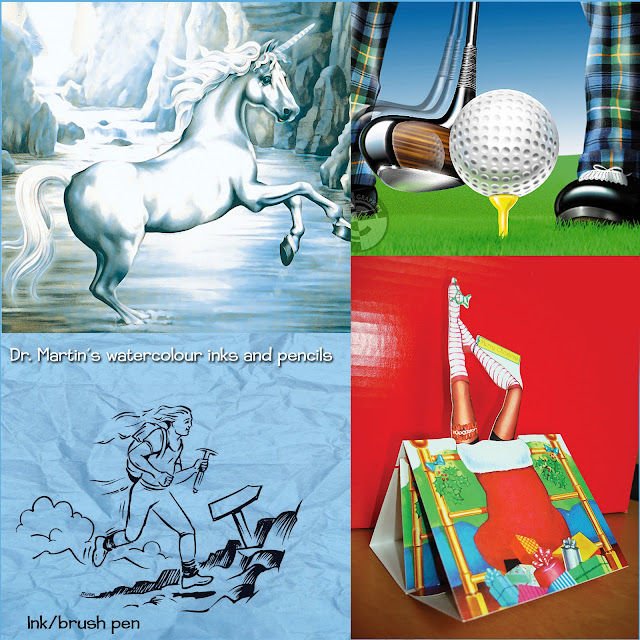 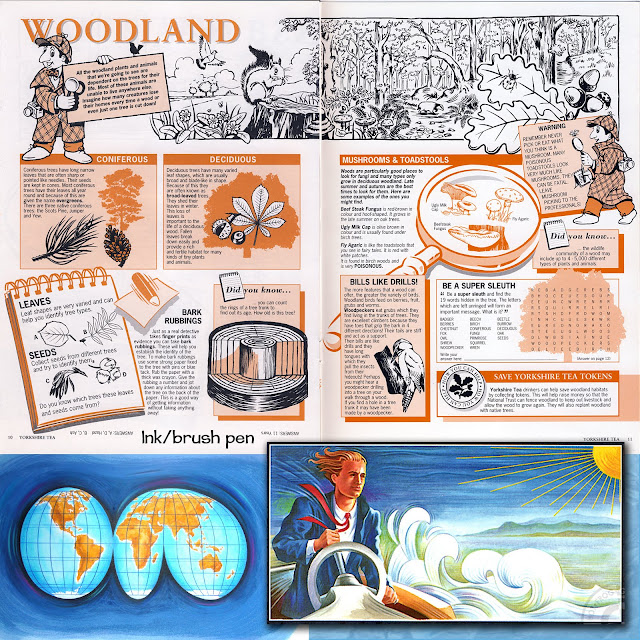 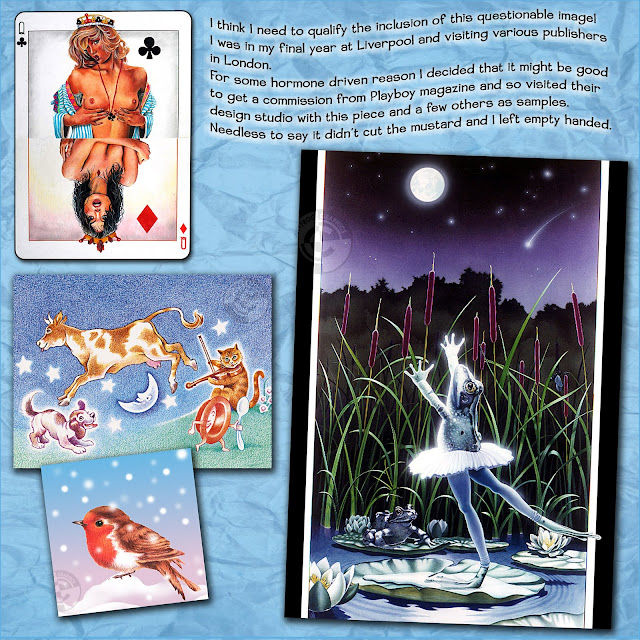 Labels: Crayons, Frog, Golf, Gorilla, John Lennon, Peace, pencils, Robin, Unicorn, watercolour
•POSTCARDS
Postcards, like stamps, are an almost perfect art form.
They can be powerfully angry helping campaigners put over their point in the most succinct way.
They can be a snapshot window to the world (pre FaceBook) and can convey the journey you are currently enjoying to the folks back home.
I once bought a pack of 50 old, used postcards and found hours of entertainment reading out the sometimes bland, sometimes poignant messages scribbled on the reverse.
In his book THE POSTCARD CENTURY, collector Tom Philips finds the same kind of enjoyment and fascination. I mention this book because one of my miners' support postcards features in this collection of 20th century postcards.
Originally created in conjunction with Leeds Postcards my pack of 8 designs, and then a subsequent follow-on pack, raised over £25,000 for striking miners' families during the 1984 strike.
Here are some details about Tom's book...November 2000 marks the publication of Tom's latest book, The Postcard Century. It tells the story of the Twentieth Century with postcards and the messages they contain.
Like so many of Tom's projects, this book grows from a set of rules: the postcards had to bear contemporaneous imagery (e.g., a Beatles card from 1962, not 1996); they had to have been sent; and the message ought to relate to the image on the recto. The result is a treasure-trove of first-hand accounts of the banal and sublime, the profane and the sacred.
The book has already received critical acclaim in the British press, including a stirring piece by Simon Callow in The Observer.
My postcard designs eventually influenced the publication of MY first book DRAWING CONCLUSIONS. Along with charts and cartoons, illustrations and photographs it chronicles the main campaigns during the acid reign of Thatcher. Plus, a foreword by Bruce Kent no less!
Still available, directly from HFG, email for details. 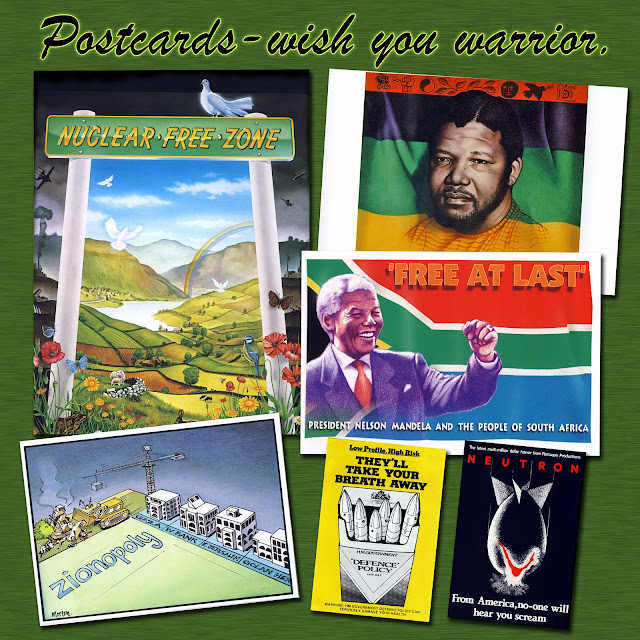 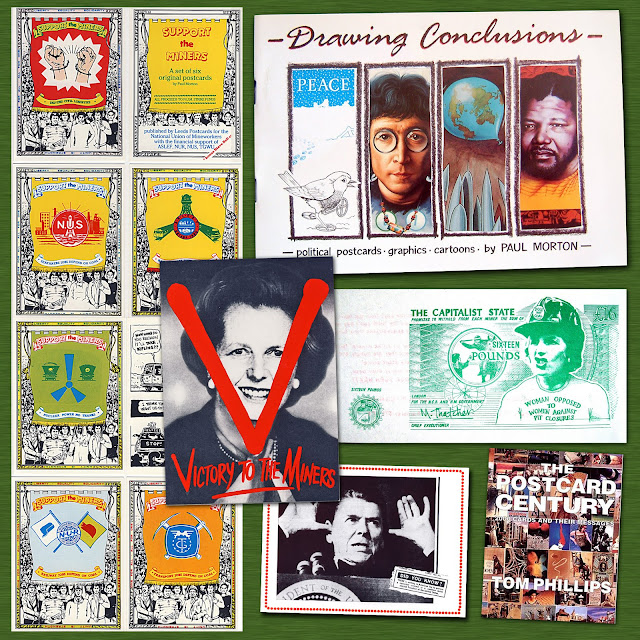 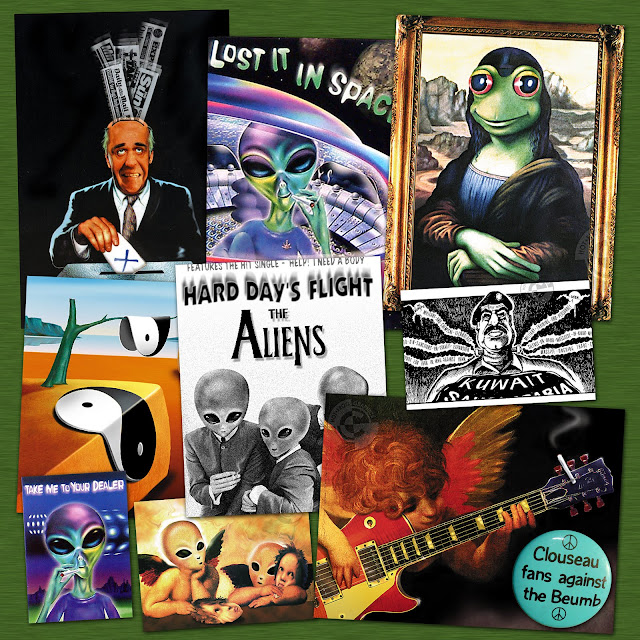 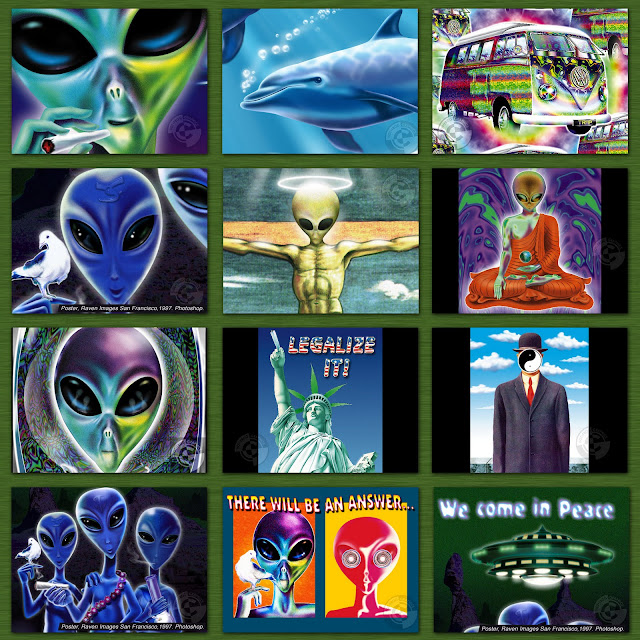 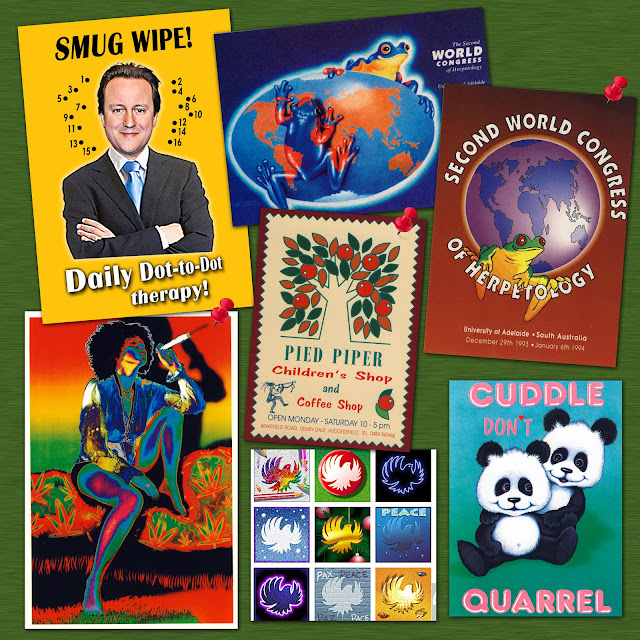 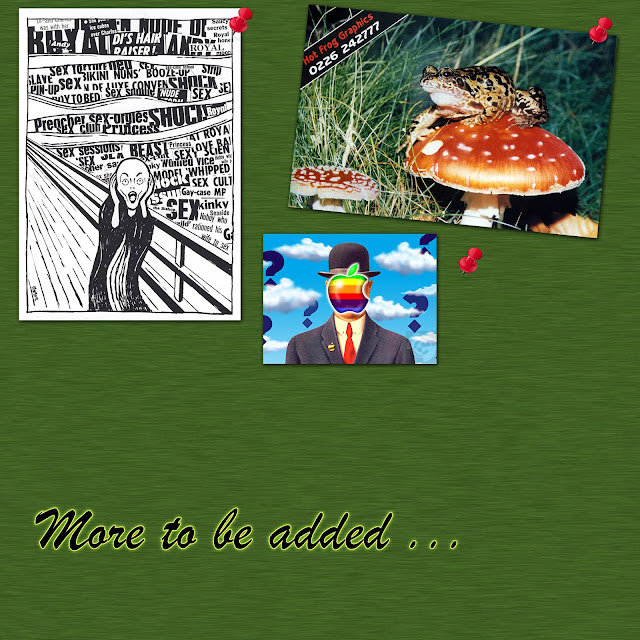 Labels: Aliens, Dolphins, Frog, Miners, Nelson Mandela, Peace
•LOGO AND CORPORATE DESIGN
HFG has been involved in the design of identity and logos right from its inception.
Literally hundreds of companies have had the Hot Frog treatment, many have lasted right up to the present day.
The discipline of branding a company is a challenge I enjoy and obviously quite different from the illustration work that forms the bulk of my work.
For other inspiration try these links …
http://www.logolounge.com/
http://designshack.co.uk/articles/graphics/50-fantastically-clever-logo 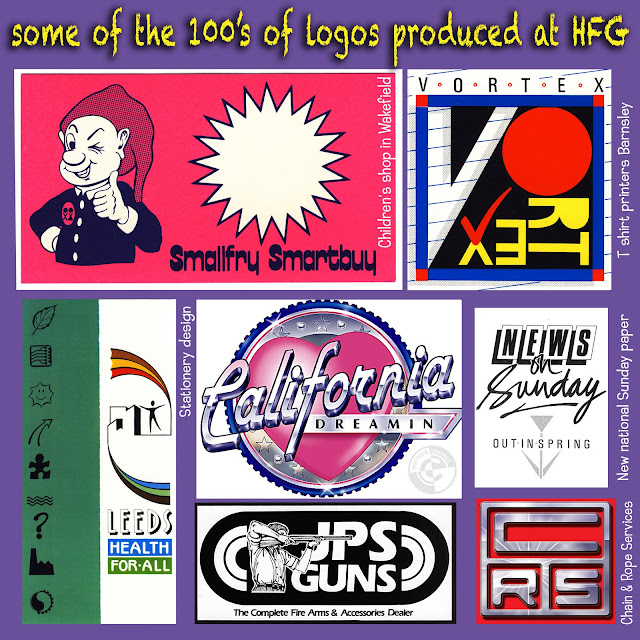 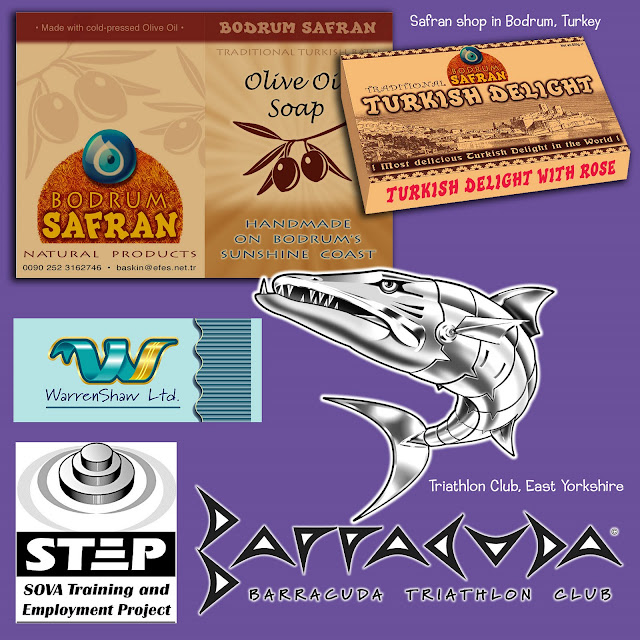 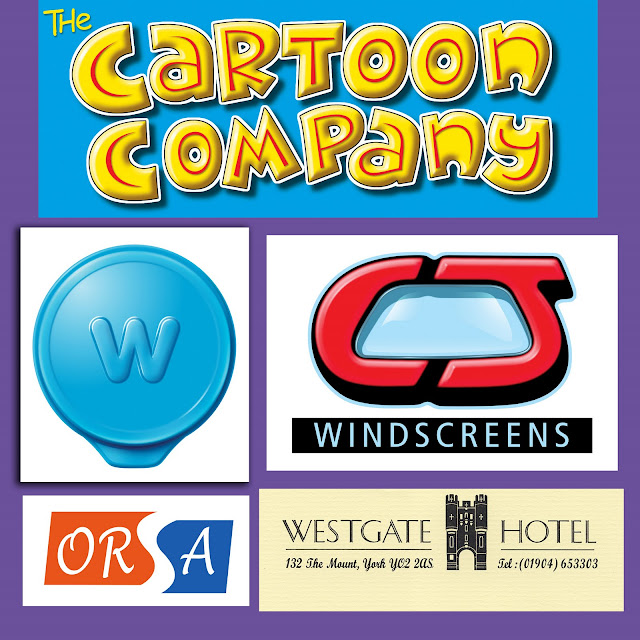 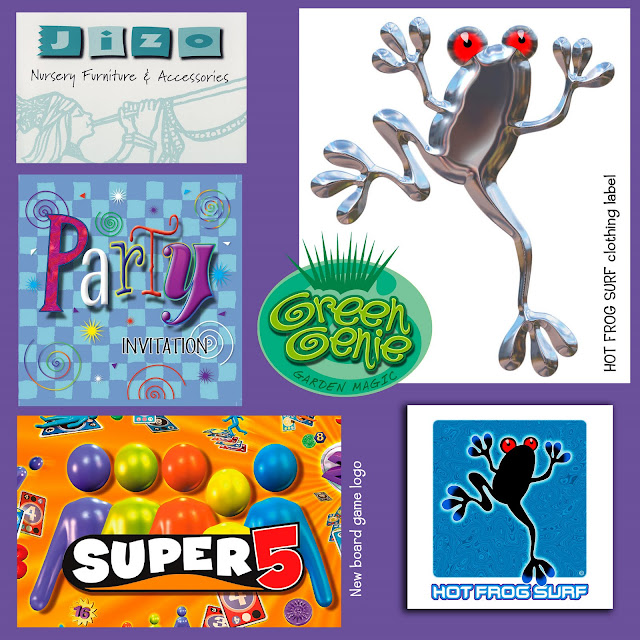 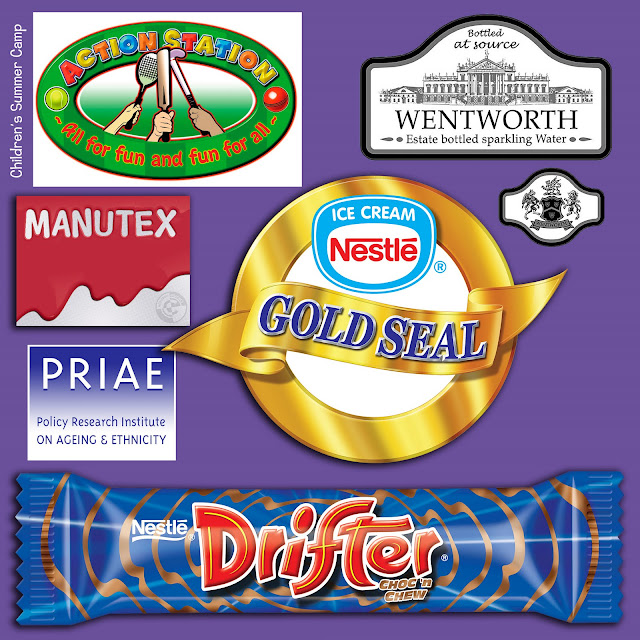 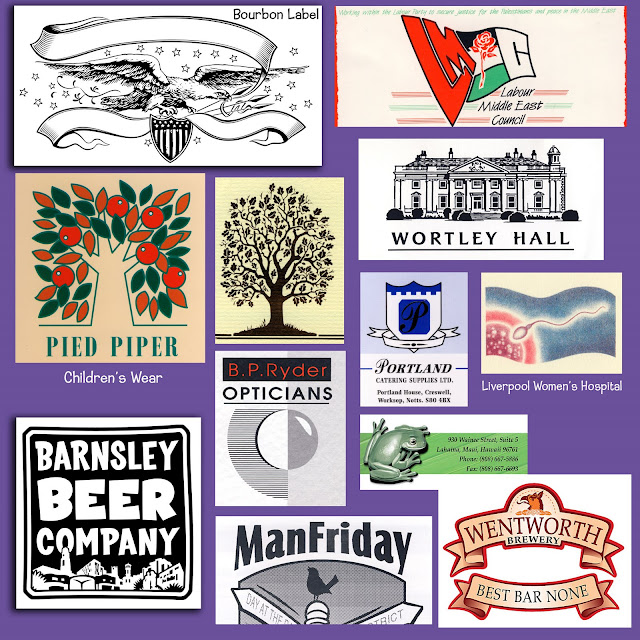 •WENTWORTH BREWERY
I was asked from the conception of the brewery to be involved with the design of a logo and possibly some beer clips.
Little did I realise that our relationship would last for the next ten years and beyond.
Some 250 plus, beer clips later, along with dozens of bottle labels and countless posters, wobblers, beer mats, postcards, brochures and awards etc etc and we are both still going strong.
I have the pleasure and the pride in having coined the strapline for my favourite all-time Wentworth tipple - Deeply Delicious! for their remarkable Oatmeal Stout.
Burnt toffee, coffee and chocolate overtones do indeed make your mouth water at the thought of it and the actual velvety dark, smooth stout certainly doesn't disappoint.
Beer aficionados might be interested in the page that reveals some early influences.
Please feel free to click on any image to enlarge but remember all are strictly copyright.© 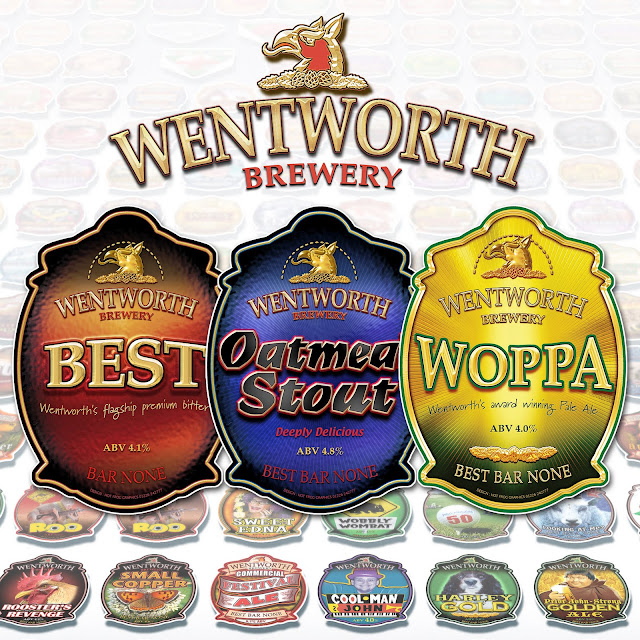 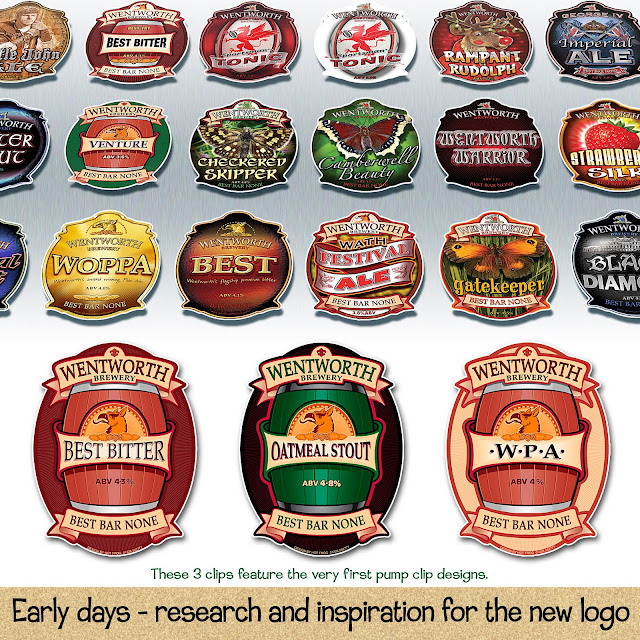 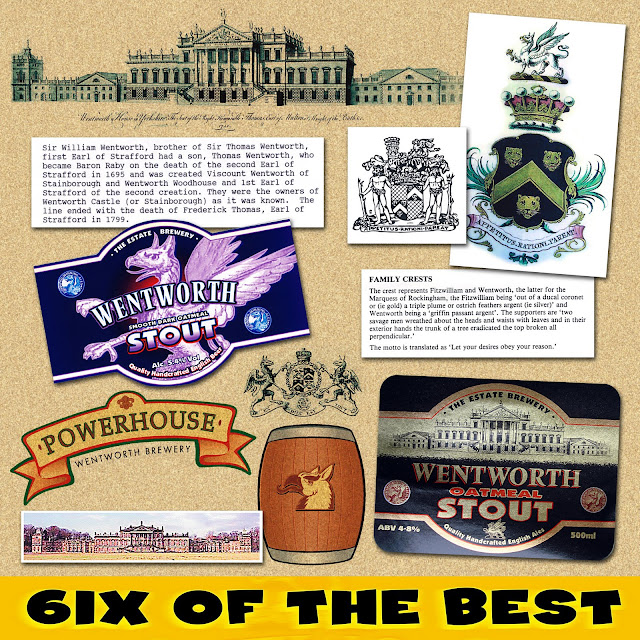 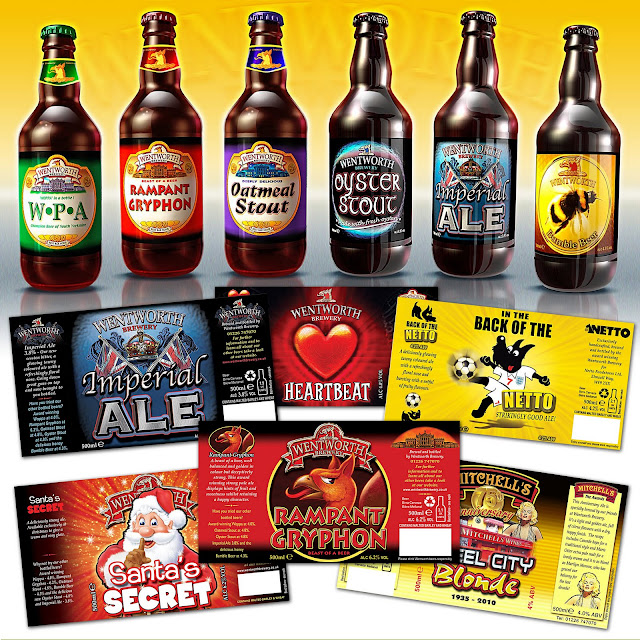 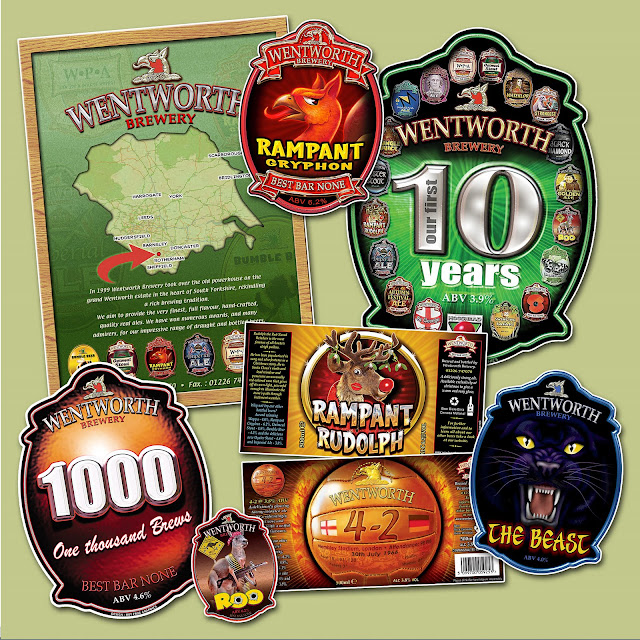 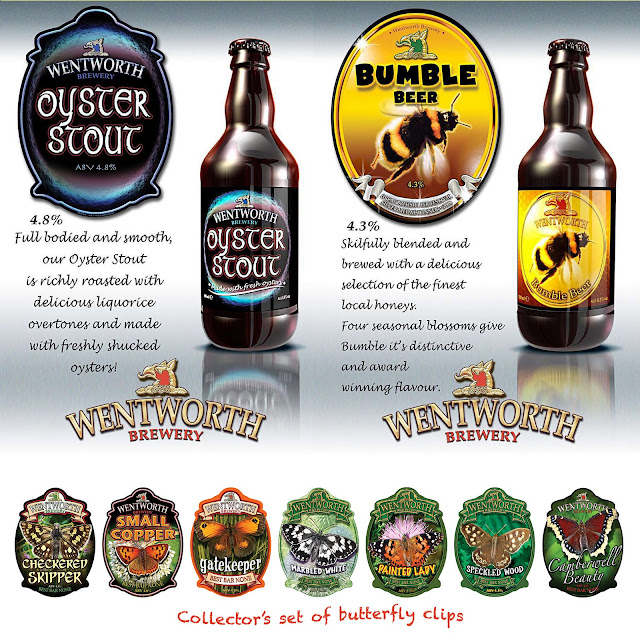 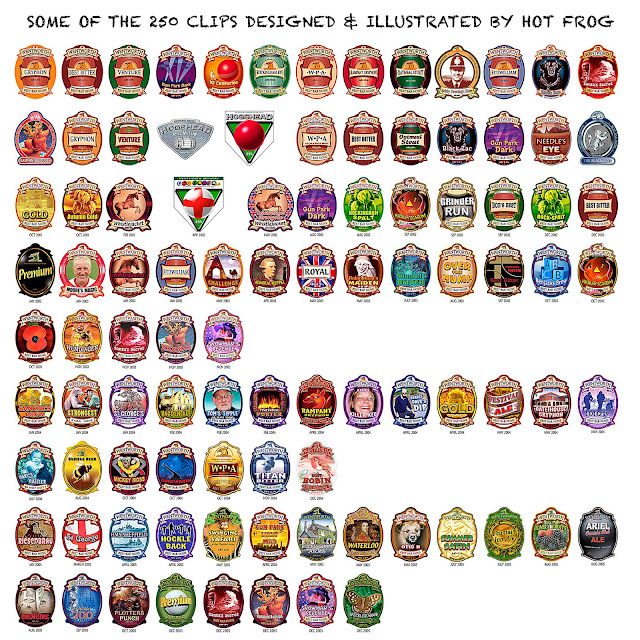 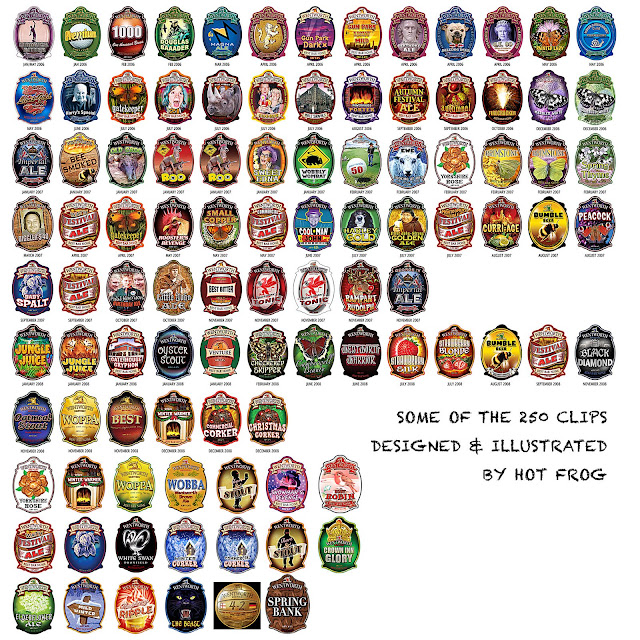